Beaufort: How things change and stay the same

I’ve been back and forth to Beaufort many times since I officially “grew up” there. It must have a hold on me because I never get tired of being there. Beaufort, like Savannah, is a place frozen in time. During the Civil War Beaufort surrendered to the Union Army and became one of their southern headquarters. Because of this most of the historical homes and buildings were preserved. And yet, Beaufort has also kept up with the changing times. There is a sense of vitality and solidness here that makes you feel like they have the secret to longevity or a magic spell that sends you into another time. I could go on for a while about this place that I called home for a full 1/3 of my life, but I will start with these few photos and hope to convey the gravity of the place.

While we were standing outside this famous house, a horse and buggy tour group came plopping by. We got a small history lesson, some of which we already knew. This house is one of the oldest houses in Beaufort, nearly 200 years old. The oak tree in front is believed to be almost 500 years old. The house was used as a hospital during the Civil War and is reported to be haunted. I knew a woman who lived there for a while and she confirmed this fact. She said she saw “figures” at the ends of hallways, and “felt things” while she lived there. According to the tour guide it is one of the most photographed homes in America. I know I’ve taken at least 30 pictures of it over the years. I have also photographed this scene right next to it a few times: 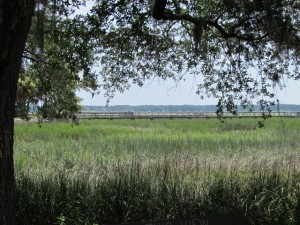 Marsh view of The Beaufort River

When we were there on Monday I noticed a sound I had never heard before. It was a bubbling sound, like someone popping bubble gum. Sam said it is swamp gas, spewing out into the air. Now I know why Beaufort has such a distinctive smell! 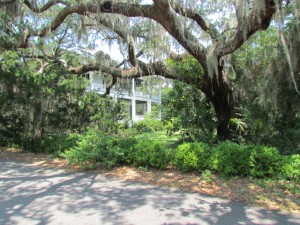 We call this the “Big Chill House” because that movie was filmed here. There have been several movies made in and around Beaufort: The Big Chill, Forces of Nature (Sandra Bullock), The Great Santini and The Prince of Tides (both by Pat Conroy), as well as parts of Forrest Gump. Here is a picture you might recognize from Forrest Gump:

Beaufort, SC is a place that is steeped in history; the Civil War is just the tip of the iceberg. It is a string of 20-something islands that each have thier own versions of history. Families trace their connections way back here. Grandparents pass down the stories that their grandparents told them, and there is a deep respect for the land and the water. Water is the life blood of this place. You can find fresh seafood everywhere and if you don’t like your fish fried, well, you just ain’t southern.  Everyone is welcomed though. Native Beaufortonians know the value of tourism and are pleased to give you directions or tell you a story about when they were little and this or that happened.

I have one more picture that means something to me. It is of a huge old oak tree that sits on the edge of the bank of the Beaufort River off Bay Street. I rode my bike here many times and sat under that tree, like I sat on the beach, pondering the big questions of life. I feel some ownership of this tree, even though I know it will one day crumble to the earth like all things do. It has a spirit like every other oak tree here; for untold years it has seen the generations come and go; it has watched over the shrimp boats passing through, and the sailboats anchored out in the river, and the youthful bike riders on their life’s journeys. Here she is: 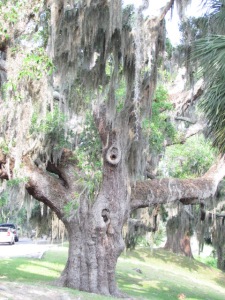 If I never see Beaufort again I know I will have certain images burned into my mind: the easy, flat ocean, the centuries old houses on “The Point,” the marshy views of the river, and one or two special oak trees who remind me how strong I can be if I only believe in myself.

Beaufort is a place that gets under your skin and becomes part of you. And you don’t have to live there to still feel like you are a member of its society. What a gift I have had to be able to “grow up” there and to come back so many times to reassure myself that things are still the same in the ways that matter. I know I’ll be back, but I also know I don’t need to go back because Beaufort is in my blood.