It’s been a while. I’ve been busy. Busy walking through spanish moss covered plantations, and riding my bike down sandy dirt roads and collecting shells from the various Florida beaches. While the rest of the country was dealing with unusually cold, snowy weather, those who were able sat outside on their lawn chairs in their shorts and flip flops. Yes, it’s unfair. And, yes, I did feel a little guilty. But I thought it was a good way to end this part of the long journey to…where was that we were going again? Oh yeah, Simplicity.

On the way I gathered a few images of simplicity. Here are just a few:

sunset on a river

I somehow knew there would be an amazing sunset when we arrived in this New Bern campground. We waited for at least 30 minutes for the sky to light up. I’m glad we were patient. There’s nothing like a gorgeous sunset to bring you back down to earth.

When I saw this family sitting together I could remember countless times doing the same thing–sitting and watching the river flow by. No words needed. Just breathe. 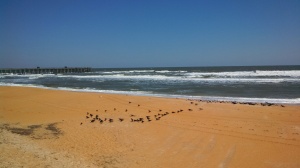 black birds on the beach

Florida is full of wildlife, birds in particular. I loved the symmetry and mind-meld between these birds.

We watched this little crane chick grow from a mere ball of puffy feathers to a gangly teenager in just a few weeks. His, or her, parents were always nearby, teaching life lessons.

shells buried in the copper sand

If I posted pictures of all the beaches we went to, it would get redundant. I love the simplicity of this image. 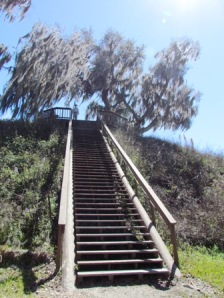 There is a man at the top of these stairs. He walks up and down 108 times several times a week. He says he has healed his heart doing this. The stairs go up to the top of a sacred Indian ceremonial mound near Clearwater, Florida. His simple journey up and down made me smile.
****
Not surprisingly, in the past two years, I discovered several times that there is no place called “Simplicity.” And not much about life is simple. But when you see simplicity, or feel it, or hear it, or know it’s there, you really ought to be ready to capture it for all those ugly, complicated future moments. So, that’s what I did. 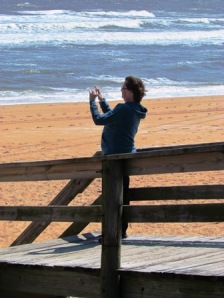 So what started as an attempt to help myself through a difficult transition quickly turned into a travel journal that was sometimes dominated by photos. I discovered that I love taking pictures and I think I have developed a good eye for a good picture. They are treasures for me now, memories that will nourish my soul when I least expect it and most need it.

Here is my most recent moment of simplicity. I took this photo with my phone as I was leaving Virginia Beach for Williamsburg a couple days ago. I didn’t expect it to imbed itself so deeply into my consciousness. But it has.

It is symbolic of the need for silent awareness.
You can’t get more simple than that.