Heat Bubble: From Columbus to Savannah and Beyond

It was so muggy this morning that my glasses fogged up when I went out to walk the dogs at 6:30. Then the camera lens fogged up when I tried to take pictures before we left. The outside of the RV was wet with condensation. We had it pretty cool inside and I guess it stayed warm and muggy outside last night. Just another reminder of where I am now.

Here are the things that make it clear where I am:

So, imagine all of this, the sounds and sights and complete oppression from the humidity when you look at the pictures I took at the campground outside of Columbus, GA.

one of the lakes at Lake PInes campground 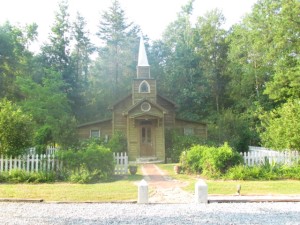 The owner of this place must be an Airstream collector because there were about six of them in various sizes and shapes. It brought back some memories, since I was slowing down and all… I guess we used to live in an Airstream when I was 5 or 6. I do remember it–me and two of my brothers sleeping together in one bed, a picture of us all looking out the front window, and later, me being laid down on the couch by my bus driver one day after school. It turned out I had appendicitis. My dad was in Okinawa and my mom had four of us to care for. My brothers were all younger than me and at least one of them was still in diapers. I can only imagine the stress she must have endured during that time. We saw this very same Airstream in a trailer park across from where we lived when I was in high school. A miracle? Maybe not. Military families move around a lot and they tend to live in similar places.

We left the lakes and the dense air with all the Airstreams behind and drove off toward Savannah, GA.