“So, how do I get a membership to this camping club?” you may ask. Well, let me tell you, it’s easy, and not as expensive as you may think.

Years ago, being a member of Thousand Trails was pretty exclusive. People paid upwards of $10,000 to be lifetime members, which meant that they had year-round access to 30 or so campgrounds across the US. Back then, forty years ago, this was a new idea. The campgrounds were also new. People paid yearly dues to keep things nice and took pride in being a part of something similar to a yacht club. Things are different now.

These days, much to the chagrin of the original lifetime members, anyone can get a membership for as low as $425 for a whole year. Of course, there are limits to the membership. Instead of having access to the whole country, you only get one “zone,” which is basically about 18 campgrounds near you. If you camp a lot, this is a good deal since your actual camping fees are either free or $3. per night once you’re a member. And of course, there are other deals that may suit you better, but it all depends on how much you like to camp. 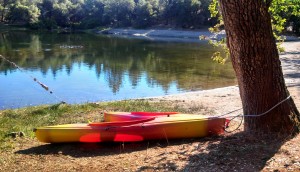 Sam and I sold quite a few new zone memberships in the four months we lived at Lake of the Springs. It wasn’t hard, once we figured out how to do it…sometime in July. We had no real training, so we flew by the seat of our pants so to speak, and now that the season is over, well, we were just getting started. In any case, the campground did pretty much sell itself, except for a few sour apples. The hardest part of our job was answering questions like this:

“Why is Thousand Trails letting all these ‘people off the streets’ in? They aren’t members and they don’t care about the park and they make noise and leave their trash all over, and I’ve paid $____ since 1972 and now the place is going to hell.” Etc.

People off the streets were actually potential new members, some of whom are now actual real members. But the park did let non members camp there for a fee. It’s how they made their money to pay their staff and keep the lake stocked with fish.

As much as we wanted to make things right for all the “old timers,” we couldn’t. The fact is that Thousand Trails has been around for over forty years and it is showing its age. Like America, its infrastructure is crumbling. Picnic tables need to be replaced, pools need to be resurfaced, roads need to be repaved, and plumbing and electrical systems need revamping. Maybe member dues haven’t been used to their best advantage. But that was far beyond the scope of our job description. We were there to sell memberships, not solve the problems of a system that was sinking under its own massive weight.

The last week we were there the power went out for a whole day and night, through no fault of the park, I might add. It was very hot that day and the pool was closed for repairs. I heard a couple neighbors complain that now they wouldn’t be able to make dinner or finish their laundry. Many were actually sitting outside of their RV’s waiting for the power to come back on so they could get on with their lives. Some simply got into their cars and drove to the next town for a nice dinner out, only to come back to find no power still.

After PG&E called to say that there would be no power until the next morning, I heard the rangers on the walkie-talkie working out how to distribute flashlights and batteries to anyone who needed them. “It will be sort of like camping,” one of them joked. Yes, camping. Remember that?

So, the final conclusion is this: If you think you can handle the great outdoors, with or without electricity and running water, you will love this deal. For only $35.42 per month you can have access to 30 plus campgrounds, that’s two zones for the price of one. You only have to commit to a four year contract and then you can camp your little hearts out. As our super-salesman supervisor would say, “What is there to think about? This is the deal of the century!”Or something like that.

Now back to the rest of this adventure.