Christmas with the girls

Jennifer, Brenda and me

Me and Rebecca at Armstrong Woods

So, here’s some midlife stuff. One day you realize that your kids have grown up. And then you realize it again. And again. I’m surprised at myself since both of my daughters have been out of the house since they were teenagers. Now Jennifer is 35 and Rebecca is 30. They’ve struggled, but they’ve managed and they both seem happy. Still, mothers wonder, are they ok? Do they need anything? How can I help? Did I give them the tools they need to survive in this world? It has occurred to me (again) on this trip that they are both fine and maybe I was a good enough mother. That’s all we can hope for, right?

We spent some time with Rebecca on her birthday the week before Christmas. We went to dinner, then, the next day, to the redwoods where we had taken her many times before when she was in elementary school. She loved it, again. She only lives a few miles from this magical place. I really hope she visits here often. But that’s the mother in me again. 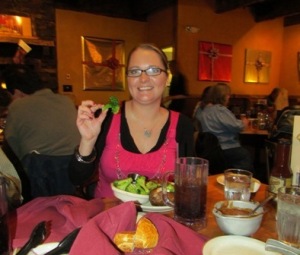 Rebecca and Lani in a tree. Looks like he’s holding the tree open for her.

Rebecca wasn’t able to join us for Christmas dinner since she had a migraine. This was one of those moments when I felt the pull to “do something.” But she’s been dealing with headaches and fibromyalgia for several years now. I just texted her and wished her well even though my heart was breaking for her.

Jennifer and Brenda had prepared a nice dinner for us: prime rib, garlic mashed potatoes, brussels sprouts and a Christmas kale salad which was just gorgeous. Oh yes, a real homemade pumpkin pie. The food was perfect. It was nice having a small intimate dinner with them. We caught up on stuff and took the dogs out to the park across the street.

Jennifer and her dogs

Sam and the dogs in the dog park

Jennifer and Brenda live in a part of Oakland that seems like an oasis of peace in the midst of chaos. Even though Oakland has a reputation of being rough, there are pockets of art and creativity and relative serenity. I think they may have found one. Here is the view from their street.

View of Oakland from 15th Street

When we drove back to the campground on Christmas night I felt kind of melancholy. Nevermind that my eyes were burning from what I now know is smog. Nevermind that I had a creeping headache from all the driving around. And nevermind that I was leaving them again and who knows when I will see them again? It was so familiar, and so unwelcomed. But I knew I had to feel it, again.

Thankfully, by the time we got home I realized that parents never feel “finished” with their children. And there never seems to be enough time to do and say what needs to be said and done. I can only hope that I have done and said enough to let them know that they are precious to me and I am very proud of them.

Saturday we will be officially moving on. We will stay in Santa Barbara for a little over a week, seeing Sam’s sister before we start to head east. This time we will be taking a route we haven’t taken before. In order to avoid the winter weather we will be driving as far south as possible on highway 10.

What lies ahead? Who knows? It’s the process that counts. Thanks for joining me.