Apache Junction is about 30 miles from Phoenix. We thought we might do something touristy in Phoenix, but after driving around it during rush hour we decided it was just too big and conjested. So we found a couple of things to do locally. 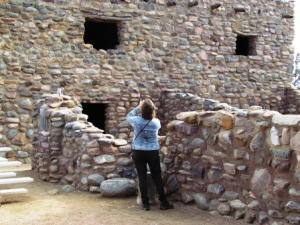 me taking a picture

We had to drive through several old mining towns to get to this site. Besh Ba Gowah means “metal camp.” It fits. All around it were huge copper mines.

copper mine at sunset

My next post will show what an old copper mine can do to make money in the 21st Century.

And, of course, someone had the bright idea to make some money on this whole mining theme.