Exploring Tuscon in a day

Last Sunday we were in Benson AZ, just outside of Tuscon. We decided to go explore…without eating first. That is always a mistake. We ended up in a part of town that only seemed to have Mexican food. Every single restaurant was Mexican and they all said they were the best. We didn’t want Mexican that day so we kept driving. But after about 45 minutes of nothing but Mexican, we decided to just pick the next one. Here it is: 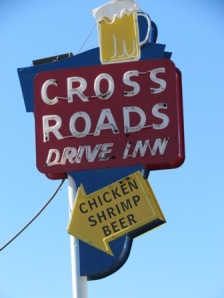 We didn’t see this sign until after we had visited. Pairing chicken and shrimp with beer should have given us a clue. But once inside, I didn’t see one person overdoing the beer part. It seemed to be all about the food and we were very hungry! 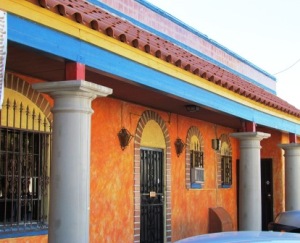 With such a colorful outside, how could we go wrong?

The inside was just as colorful. 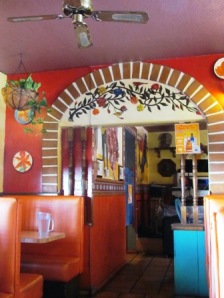 Entrance into the party rooms.

I love this doorway. It went into a room with a DJ who was blasting happy music all over the place. He was dancing in his chair. It was all very loud and rambunctious.

And the walls were covered with pictures like this: 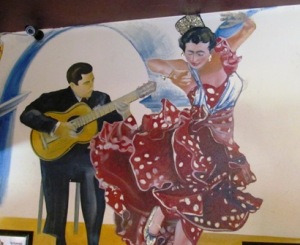 This picture depicts the energy throughout this restaurant: exhuberant!

I mean COVERED. There was so much to look at and listen to and smell and taste. An explosion of sensory input.

This was indeed authentic, perhaps the best. The food was absolutely THE BEST Mexican food I’ve ever had. The tortillas were homemade. Have you ever had real homemade tortillas? Amazing. Nothing like the ones you get in the store. I imagined someone’s grandma back there in the kitchen mixing and grilling away.

So, it was loud, and boisterous and colorful and….well, very filling. I ate too much and suffered for it later that day.

But that didn’t stop me from continuing to explore Tuscon.