The blog monster ate my words!

Last night I was determined to post something about Albuquerque. I wrote a little and then started adding photos. Well, I’ve had this problem with my blog, or is it wordpress? that ends up with me cursing because the post doesn’t show up the way I created it. I spend a lot of time composing my words and making them work with the photos and then to have the whole thing end up scrambled into senselessness just makes me wonder. What am I doing wrong? Should I go ahead and buy the “real” blog spot so I can “control” my own blog? Well, I haven’t decided yet, but I am going to try again to add some words, my thoughts on the past few days in Albuquerque, NM. I posted photos this morning and they may be more interesting than these words, but, well, I need to write and that is why I do this anyway.

I love writing that word. Albuquerque. It is symmetrical and has a rhythm to it. We arrived in Albuquerque on Monday evening with images of Williams, AZ and the Grand Canyon still in our heads. Within a few minutes of leaving Williams we were in desert again. I hadn’t noticed the subtleties of the landscape between the Southern California and Arizona deserts until today. It seems like they both have this dry, crunchy, silver bush type stuff all over. But each of them has something else. Some have lots of junipers, some have short pines, others have tall pines, and still others have just scrub brush, whatever that is. We are driving along highway 40 so I’m sure my viewpoint is limited. But there is a difference from town to town.

desert between williams and albuquerque

anothe desert scene a little farther down the road

As soon as we entered New Mexico we knew we were in a different state. Suddenly there were all these reddish plateaus and layers of oddly shaped rocks in every direction.

natural cave on the side of highway 40

New Mexico is nicknamed “The Land of Enchantment.” I now know why. It is interesting if not inspiring, at least from the highway. It seemed like a long way from Williams, Arizona to Albuquerque, but once we arrived it was obvious that the place would leave a mark on us.

Driving east on Highway 40 into the city ofAlbuquerqueyou are treated with mile after mile of sculpture and metal work, and architecturally beautiful overpasses. One had a stylized version of an aloe plant in gold.

The best thing though was the landscaping along the road. Each off ramp had its own little rock/succulent/sculpture garden. I tried to take photos but we were going too fast. I guess I’ll just have to remember it.Anyway, our first impressions ofAlbuquerquewere positive. There was a creative energy that we hadn’t seen or felt since leavingSan Francisco. It seemed like almost every corner had some sort of sculpture or painting or mosaic. Nothing was drab—except of course for the rows of adobe houses and apartment buildings. They were charming though and very practical considering the dust and heat. The roads were clean and the city was laid out in a grid with very long roads that cover the valley at the foot of a mountain range. It made sense, until you actually tried to get somewhere, like the only Whole Foods Market in the whole town. Even using a smart phone’s navigating system, we had to drive around for quite a while before we ended up on familiar ground—in the produce section of Whole Foods.

We also discovered that people drive very recklessly here inAlbuquerque. I thought it must be the heat but this was ridiculous. Every time we went out we avoided at least three accidents caused by someone who was in a hurry or just mindlessly racing down the street.

In any case, we decided to stay there for a few days, planning to be inside during the hottest parts. We found a huge movie theater and saw Prometheus. This is a movie I would recommend to anyone who is a sci-fi fan, or a Ridley Scott fan. The special effects were amazing, but for me there was too much violence, and there was an assumption that “aliens” only want to hurt us. I must say that the acting was very good, and they left it open for a sequel. We thought we had beat the heat by going to a movie that ended at 5:00, but that is the time when it is the hottest it seems. Back to the air conditioning.

Yesterday we decided to brave the heat and spent the day exploring Old Town and a couple of museums. Photos of this adventure are in my previous post. We started at the Native American Art Museum, but they only had one gallery open and they didn’t allow photography. They have a very diverse collection but I felt like we got an incomplete view of the subject. We decided to check out the grounds and the sculpture garden which was absolutely worth standing in the sun for. This garden led naturally through a gate into what is referred to as “Old Town.” The mosaic on one of the gates was one of the most beautiful I have seen. Very inspiring. 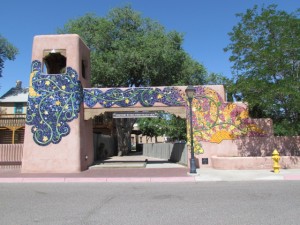 I enjoyed taking photos of Old Town, especially the various shadows that caught my eye. I’m sure we only saw a small part of it but what we saw was enough. There were many blocks of squatting little adobe shops that look similar outside but different inside. And inside it is obvious that they have been there for a while because the beams are crooked and need painting and the floors have worn spots on them where people have come in and out thousands of times. I didn’t ask how old Old Town was, but I didn’t care. I was there for the simple pleasure of seeing.

More later on the Museum of Natural History: rocks and dinosaurs!